A couple of high-class, high-priced hookers, out until dawn with  a couple of “middle-aged playboys from the corn belt,” Marie (Lilyan Tashman) awakes at 5:30 the next afternoon to a headache, while, BELOW, Wanda (Kay Francis) peruses the evening newspaper.  Girls About Town (Paramount, 1931), directed by George Cukor. 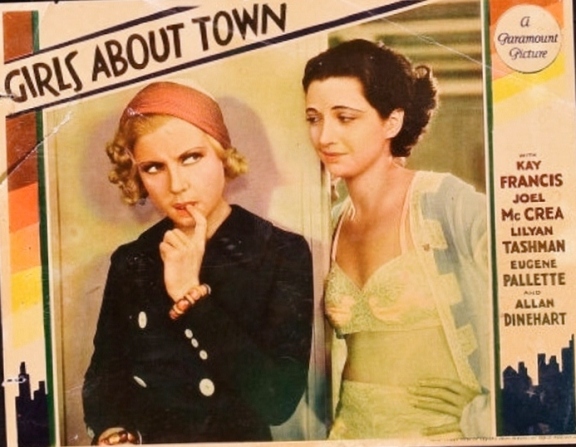 One of the great pleasures of studying the past is the discovery of something important, something amazing that was not known.  Be it unknown to you or the greater population, the feeling is the same and the first question that comes is “How could I (or we) have missed this?”  I have been fascinated by both history and movies since early childhood — two entities intertwined by their very nature, movies being a literal illustration of the past, and the history of motion pictures, an amazing story in and of itself of technology, art, culture, politics, and humanity in general.

I became immersed in the entire spectrum of film at a time when the term “classic movie” was unknown and, had it been used, would have been meaningless.  American film, as we referred to it, was relatively seamless.  Other than the obvious break between silent and sound (which I see as far less obvious today), film was studied “from then, until now.”  The same parameters applied to “foreign” film — French, Italian, English, German, Soviet, Swedish, Japanese — they were either worthy of your attention and repeated viewings, or not.

The scope of film was so deep and wide that despite my efforts to see and learn as much as I could, there were huge swaths of movies that I had not and would probably never see, movies that had not been screened since their initial release, had not been broadcast, at least not since the earliest days of television when movies filled a huge void in programming.  I accepted that many films would remain forever out of reach, for the average fan in particular.

But the eighties and nineties saw the rise of home video and the rerelease of rarely seen films almost on a weekly basis, as well as the “rediscovery” of films previously thought to be lost.  It dulled the senses after a while, and bred complacency.  It took a cable television channel that showed “classic” movies including many silent and early sound films to remind me that there was still much out there that I did not know at all, but could now actually see on television.  Enter Kay Francis. 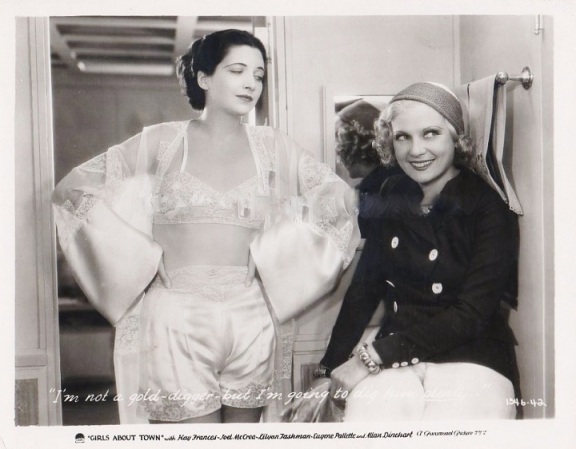 While I’ve detailed my discovery of Kay Francis in other articles, I am still “discovering” her work.  Kay Francis became a star at Paramount and made 18 films there from 1929 to 1932.  Unlike her subsequent work at Warner Brothers, her Paramount films are, with a couple of exceptions, rarely seen on television and most have not been released on home video.  Bootleg DVD’s are the best (though technically illegal) option for the average home viewer.  One of her better films (and having seen little of her Paramount work, I can’t compare it directly to most of her output for that studio) is Girls About Town, from Paramount in 1931, directed by George Cukor.

Kay Francis arrived in Hollywood in 1929.  She had already appeared in two films that year, her debut in Gentlemen of the Press, with early mentor Walter Huston, and with the Marx Brothers in the adaptation of their hit Broadway musical comedy, The Cocoanuts, both filmed at Paramount’s Astoria studio on Long Island, New York.  The Paramount organization and the Hollywood press corps immediately branded Francis an elegant clothes-horse,

part of a new and fashionable aristocracy of “the legitimate theater” headed to Hollywood from the east coast, ready-made for movie stardom.  In reality, Kay Francis was no clothes horse, she was the daughter of a successful stage actress and a hotel manager, hardly an aristocrat, nouveau or old, and her stage experience was relatively meager, especially compared to her theater colleagues and fellow immigrants to California, Ruth Chatterton and Tallulah Bankhead.  But she did come from the same social milieu. 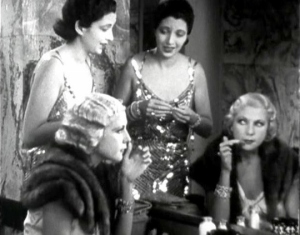 The world of American theater, based in New York, was as far removed from Hollywood as Paris is from Peoria.  Always the outsiders, living on the fringe of what was considered acceptable by mainstream society, those in the theater were not merely tolerant of diverse and unorthodox lifestyles, they were indifferent to them.  The New York theater press rarely questioned, speculated or commented upon details of the lives of those who made their living in theater, other than to note marriages, divorces, births and deaths, who was “engaged,” i.e., working (and for whom), and who was “at liberty,” i.e., unemployed.

While Kay Francis had long been “forgotten” by modern audiences, and only recently rediscovered through television and two biographies, she was an enigma even in her time of stardom.  An extremely private person, exceeded in that regard only by Garbo, she learned to keep her private life secret from even her close friends, not wishing to furnish them with potential gossip material that could be given inadvertently to the Hollywood press.

Nevertheless, rumors and unfounded stories of Kay Francis as a sexual adventuress abounded during her career.  There may have been more truth to those tales, at least relative to the mores of the times, than others that were obviously intended to harm, particularly the question of the ethnic background of Francis, whose mother was rumored to have been born in Trinidad to a mixed race couple.  In truth, the origins of Kay Francis were unremarkable.  Her parents were of German and English descent and both were born in the United States, as was Kay, in Oklahoma in 1905.

Her reluctance to discuss her private life with the press and even her friends did little to discourage such rumors.  And the stories were so pervasive that author Maya Angelou, years later, recalled going to see Francis’ movies as a child in Arkansas with her brother and fantasizing that Kay Francis was their real mother.  Challenges to one’s ethnic background or sexual orientation — with or without proof — could easily destroy careers, even lives, in mid-20th century America.  It is indicative of the wide popularity of Kay Francis, especially among women, that her career survived and prospered in spite of the persistence of such rumors.

ABOVE:  Stepping back onto the “field,” Marie (Lilyan Tashman) and Wanda (Kay Francis) put on their game faces for . . . another round with their “boyfriends,” BELOW.  As Marie describes them, “A couple of ‘playboys’ from the corn belt!”  Girls About Town (Paramount, 1931), dir. George Cukor.

Married three times before she came to Hollywood, her private diaries, much of them written in shorthand, candidly detailed her relationships with both sexes.  She socialized with the gay and lesbian community in Hollywood, one that had existed long before sound attracted New York theater actors, writers and directors to swell the ranks of those practicing a lifestyle so unorthodox for the time that they were closely monitored by J. Edgar Hoover and the FBI for no real reason other than their un-orthodoxy. 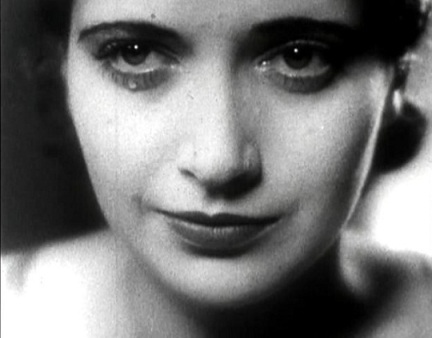 Within the same Hollywood social circle as Kay Francis were other New York theater transplants, both gay and straight, including Ruth Chatterton, George Cukor, Tallulah Bankhead and Lilyan Tashman.  Francis, Tashman and director Cukor would form the nucleus of a production that became one of the better pre-code comedies, Girls About Town (Paramount, 1931).

Starring along with onetime silent screen star and now character player, Eugene Pallette, and a new rising male heart-throb Joel McCrea, were Francis and Tashman as a pair of lovable gold-digging, high-class prostitutes.  Only in pre-code Hollywood could these adjectives be combined and applied without repercussions to characters in a motion picture.  Girls About Town is a good example, one of many, of what mainstream American film could have been and how it might have developed without resort to the dishonesty and coyness that would contaminate it for three decades following the enforcement of the industry’s production code in 1934.

Getting home at dawn, with “Mother,” their maid (Louise Beavers at far left) waiting up for them, the girls compare “war wounds,” bruises and torn dresses, from their clients.  BELOW:  Having been paid $500 each, Wanda (Francis) notes ruefully, “Well someone’s gotta pay for this dress!”

The girls find an even better paying gig, $1,000 apiece for entertaining a wealthy yachtsman and his businessman friend (Joel McCrea and Eugene Pallette).  Wanda is skeptical until she catches sight of Jim (McCrea) boarding the yacht.

Jim finds the whole idea of being entertained by a call-girl both awkward and ultimately mechanical and boring.

Wanda suggests role-playing, pretending that they are completely enamored of each other.

With Benji, Marie doesn’t need to work nearly as hard . . .

Wanda’s “role-playing” pays off in ways unexpected by both — they fall for each other.

After a swim and a convenient rescue of Wanda by Jim, the romance begins to burn . . .

Wanda may be in love, but Marie, the skeptic and the more practical of the two, is dubious.

Halfway through Girls About Town, the plot grows convoluted, yet moves at a surprisingly brisk pace.  (The art of the 75 minute movie is long-lost!)  Having fallen in love and planning to wed, Wanda confides to Jim that she is separated but not finally divorced from her first marriage.   She contacts her husband and asks for a divorce.  He initally refuses her, but meets with Jim and tells him that he’ll give Wanda the divorce for $10,000.  Jim, wanting to marry, agrees to the demand.

When Wanda learns of the attempted extortion, she confronts her husband at his apartment and meets for the first time his girlfriend and their infant child (he has told his girlfriend that Wanda is his wealthy and generous “cousin.”)  He privately tells Wanda that he actually filed for divorce from her two years earlier and was surprised she wasn’t aware of it.  Jim and Wanda agree to let Wanda’s ex keep the money, desperately needed for his “new family,” and resume plans for their wedding.

With Wanda giving up the hooker’s life, the film concludes with Marie, wary of men and marriage, announcing that she is remaining in the business as a solo act.

Lilyan Tashman was born in Brooklyn in 1896, began her career in vaudeville, and reached Broadway in 1913 in the chorus of Her Little Highness starring the Hungarian musical-comedy sensation Mitzi Hajos, and featuring the young Mae Murray.  She appeared in two editions of the Ziegfeld Follies, 1916 and 1917, also in the David Belasco production of the comedy, The Gold-Diggers, in support of (and understudy for) star Ina Claire for two seasons, 1919-1921, as well as in the hit farce, Barnum Was Right in 1923.  During this period, she also appeared in several supporting roles in film comedies, including Mabel Normand’s Head Over Heels, released in 1922.

Moving to California in 1924, she quickly found work in motion pictures and appeared in nearly 50 features for a variety of studios in the next six years, including Pretty Ladies (Metro-Goldwyn, 1925, dir. Monta Bell), So This is Paris (Warner Brothers, 1926, dir. Ernst Lubitsch), and the Norma Talmadge Camille (Schenck-Talmadge, 1926).  Tashman made the transition to sound with Bulldog Drummond (Goldwyn,1929) and The Trial of Mary Dugan (MGM, 1929), Norma Shearer’s first sound film. In 1931 she signed with Paramount, making five features that year, including Girls About Town.  Her last film released during her life was MGM’s Riptide (1934) with Norma Shearer.  Tashman died of cancer in March 1934 at age 37.  Her funeral in Brooklyn was reportedly attended by more than 10,000 mourners and fans.

I'm the King of the silent pictures -- I'm hidin' out 'til talkies blow over . . . View all posts by Gene Zonarich

This site uses Akismet to reduce spam. Learn how your comment data is processed.